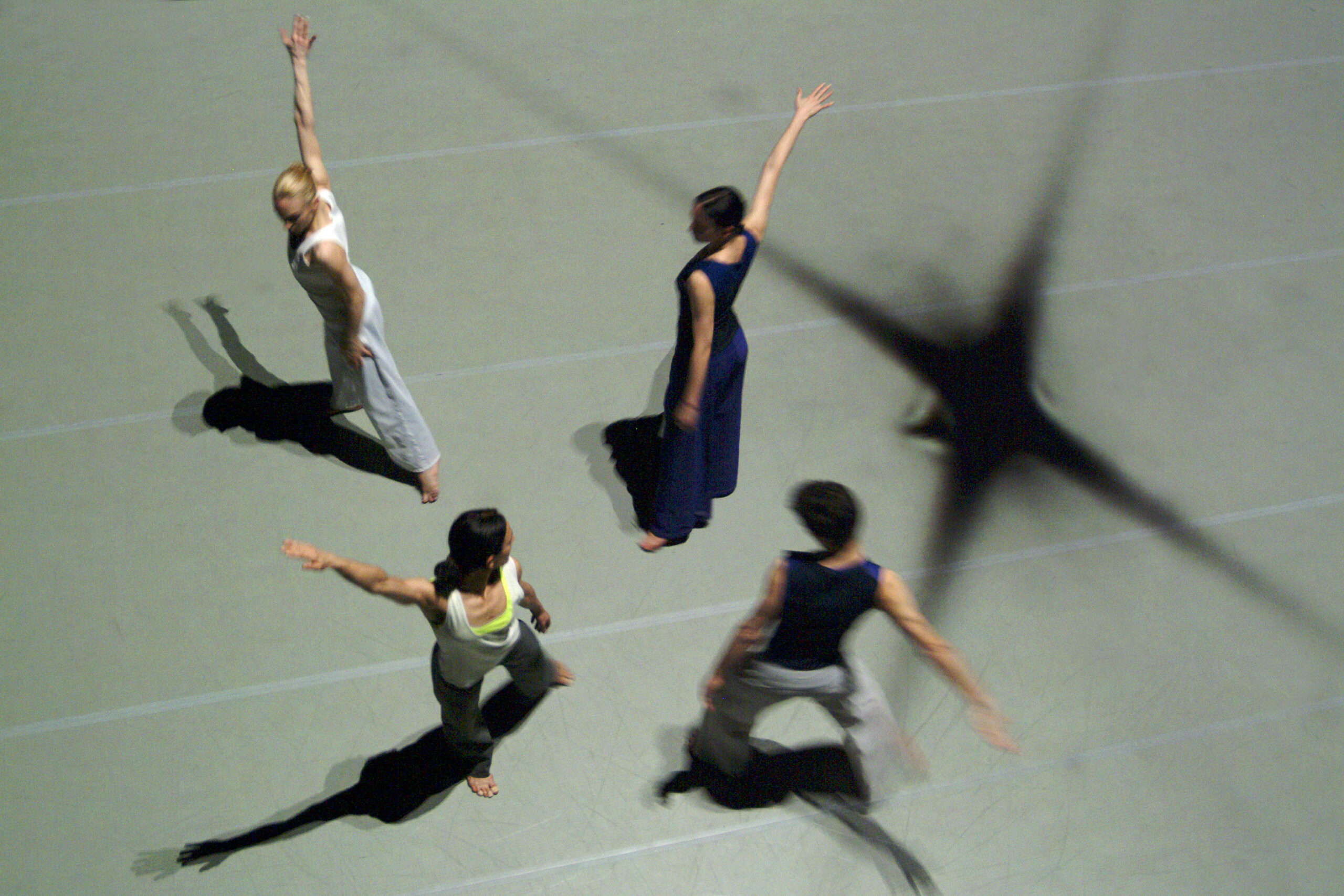 As of 2021, with the appointment of Annie Pui Ling Lok and Kat Bridge as Co-Artistic Directors, we set aside the name and logo of Siobhan Davies Dance and now solely use Siobhan Davies Studios.

Siobhan Davies Dance was formed by Siobhan Davies in 1988 after a 15 year association with London Contemporary Dance Theatre, as fulfilment of her desire to create work on a more intimate and personal level.

The organisation has grown from her passion for dance and her desire to reveal and celebrate movement as a language in its own right.  Davies pushes the boundaries of what is thought as dance, by engaging with other art forms such as visual arts, film or crafts and organically renewing its thinking.

Siobhan Davies Dance has been recognised by numerous awards including four Digital Dance Awards, the Olivier Award for Outstanding Achievement in Dance (1993 for Winnsboro Cotton Mills Blues, 1996 for The Art of Touch (1995), a South Bank Award for Dance 2000, Creative Briton Award 2000 and overall winner of the Prudential Award for the Arts (1996) following six nominations in previous years.

Plants and Ghosts (2002) saw the beginning of Davies’ move towards bringing dance to different spaces with the presentation of this piece in non-conventional performance areas such as an aircraft hangar, a gallery and a warehouse. Following the success of Plants and Ghosts, Bird Song (2004) also toured studio spaces and venues that could be transformed into intimate, ‘in the round’ style auditoria, which enabled the audience to be closer to the dancers.

In 2006, we celebrated the realisation of a long-cherished ambition when after ten years of planning we were installed in our own purpose-built home, Siobhan Davies Studios; designed by architect Sarah Wigglesworth, winning a prestigious RIBA award.

Siobhan Davies Studios is a place where the general public is welcomed with a programme of regular classes and therapies; and where we work in partnership with our colleagues at Independent Dance, who focus on development of professional independent artists.

Moving to the Studios changed Siobhan Davies Dance’s positioning in terms of the breadth of its artistic ambitions.  It offered new opportunities to us, the dance sector and the wider community.  In 2007, we started to reorganise our working methodology, retaining our commitment to working with dance artists but starting to engage with visual artists and curators.  We began to develop programmes and projects for young people based on our choreographic practices and engage with the local Southwark community. From September 2007, the Studios began a rolling programme of work from visual artists. The work from other disciplines added to the mix of ideas and practices of our work, and brought a different energy and conversation to the building.  Our exhibition programme has brought a number of emerging and established artists to the Studios, and alongside our exhibitions we also developed a programme of talks and events.

Parallel Voices brought to the Studios many of the key dance and theatre artists of our generation in a series of events curated by Jonathan Burrows (2007) placing dance and performance at the heart of the debate on art and culture in London; Isaac Julien (2008) discussing the impact between visual arts and performance and their creative evolution; Carsten Nicolai (2010) bringing together personalities who form a Missing Link – artists and performers serving as bridging figures in the arts, crossing or simply ignoring boundaries.

The Collection (2009) was the first work made under this new direction, made in collaboration with leading London gallerist Victoria Miro; a series of ambitious collaborations that look at the interfaces of contemporary art and dance, where these worlds intersect and how they might inform one another.  As part of The Collection a new commissioned work by visual artist Conrad Shawcross, Slow Arc Inside a Cube III, was installed in the Roof Studio at Siobhan Davies Studios as part of the exhibitions programme; extending and combining our programming at the Studios and beyond.

In the same year (2009), we launched Siobhan Davies RePlay*, the first online dance archive in the UK. The project to develop this digital archive began in January 2007, with the aim of bringing together all of the materials and documentation associated with Davies’ choreographies into a single collection. It contains thousands of fully searchable digital records including moving image, still image, audio and text. Many of the objects within the archive collection have been sourced directly from Davies and her collaborators’ personal collections, whilst other items have been kindly lent by institutions and private contributors. Almost all of these objects that would otherwise remain inaccessible and unavailable appear online for the first time, and in many cases represent the first time objects have been viewed by anyone since their original creation.
* RePlay was taken offline in 2020, we are currently in the process of reestablishing access to the archive.

2009 also saw us welcome 60|40 to the Studios, an independent crafts artist collective founded by Clare Twomey, David Clarke and Tracey Rowledge, to the studios for their first 60|40 exhibition with us; they have since hosted a further 4 years of responsive craft based exhibitions at the Studios each summer, inviting new artists each year such as Linda Florence (textile artist), David Gates (furniture maker) and Chris Keenan (potter) in 2010, Phoebe Cummings (ceramics), Julie Cook (textiles) and Michelle Shields (applied arts) in 2011, Ane Christensen (metal worker), Fliss Quick (jeweller) and Rhian Solomon (visual artist) in 2012 and multidisciplinary studio group Manifold for the final year in 2013.

We have been the Big Dance Hub for south London since 2009, providing a programme which works with local authorities to reach seven London Boroughs: Croydon, Kingston upon Thames, Lambeth, Merton, Southwark, Sutton and Wandsworth. For Big Dance 2010 and 2012 we delivered a varied programme of projects and events, taking the theme of art that notices everyday movement as a starting point to commission new work from professional artists, challenge the public to get creative and engage schools and youth groups.

Our education and participation programme, Creative Projects, places choreography at the heart of exchanges between teachers, youth leaders and the wider public in an extensive programme that offers alternative ways of experiencing dance to a broad range of audiences.  By applying the same artistic processes to the design of our projects as we do when creating a performance piece, we are able to introduce non-dance professionals directly to our dance artist’s practice. Creative Projects began with the Primary Bank (2007-2008) project working with our neighbours at Charlotte Sharman Primary School and developed programmes with other primary schools in Southwark as part of Creative Partnerships and the Elephant & Castle regeneration leading to further developments such as Artist Bank (2009-2010).

Following presentations of The Collection at Victoria Miro Gallery and Ikon Eastside, Siobhan Davies Dance further extended connections with other disciplines and commissioned nine artists to make, in their own art-form, work based on ideas generated by dance and choreography for ROTOR (2010).  A new dance work by Davies was filmed from above and its patterns created a score for the nine artists. Distinct elements of The Score triggered new work which responded not only to the images from the dance but also to the energies, counterpoints or character developed by the dancer’s actions. ROTOR was presented at Siobhan Davies Studios and South London Gallery in tandem, and has since been presented (in part) at The Whitworth Art Gallery, Manchester; Dovecot Studios, Edinburgh; Turner Contemporary, Margate; and most recently at Roundhouse, London in Aug 2013.

Siobhan Davies Commissions (2011) continued Davies’ approach of creating work to be seen at close range, and based on a dialogue between art forms.  Davies’ curated four new commissions by dance artists paired with visual artists bringing choreographic and visual practice into close contact and stirred together different ways of creating, resulting in work ranging from performance to installation and film.

Our Creative Projects primary programme began to develop tools for teachers with Pass it on (2010, Big Dance) exploring the use of dance as another tool to help teachers deliver a creative curriculum, with an emphasis on a cross-curricular, kinaesthetic approach.  This has been delivered directly to teachers through workshops, to student teachers through our work with the Institute of Education, and digitally through our online module available through the London Grid for Learning.  Workshops have since been developed for working in galleries and museums, such as with Whitworth Gallery and National Portrait Gallery.

Working together for the first time, Siobhan Davies and acclaimed film maker David Hinton created a new film: All This Can Happen (2012). First screened on Saturday 13 October 2012 as part of Dance Umbrella, the film revisits early cinema’s fascination with capturing the detail of everyday movement. The film has toured festivals worldwide, and continues to screen internationally. Davies and Hinton have now been invited to create a new piece together for 2015.

Initiated by the curiosity of Davies around the act and process of making, our Side by Side residency project (2012) with dance artist Laïla Diallo and craft artist Helen Carnac in partnership with the Crafts Study Centre, Farnham was a unique new project.  Without any tangible outcomes in mind, the residency was an investigation, documented with an online sketchbook sharing the journey.  The artists have since been commissioned to continue their explorations of creative process with the aim to tour their outcomes in late 2014.

Manual (2013) was commissioned alongside six sculptural works by Scottish artists as part of Every Day at Glasgow’s Gallery of Modern Art (GoMA) in June 2013.  Created in collaboration between Davies and Helka Kaski, we responded to the exhibition’s theme with a new, live work in which Kaski invited audience members to help her carry out a familiar action by giving her a series of verbal instructions, for example standing up from a lying-down position.  As they work together to complete the task, it becomes clear that what at first may appear easy, is actually complex and extraordinary, often causing amusement and bemusement.