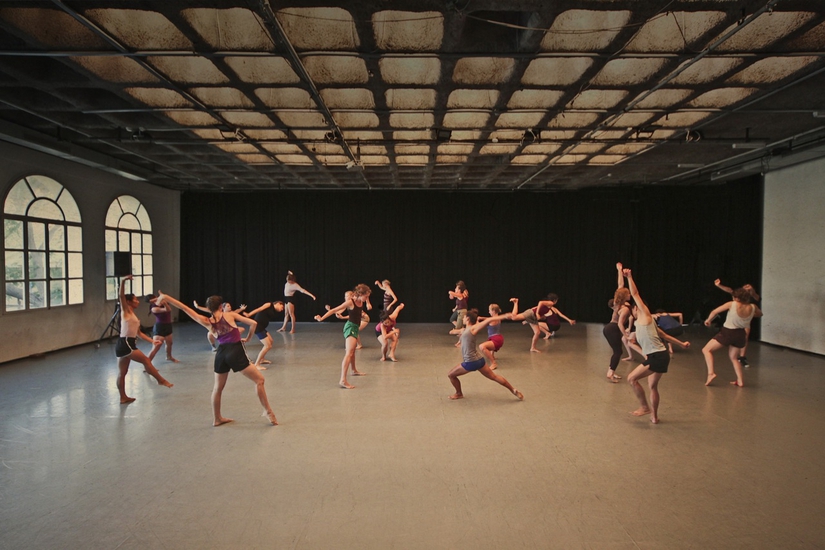 Gaga/people classes are open to people ages 16+, regardless of their background in dance or movement.

No previous dance experience is needed.

Gaga/people classes last for one hour and are taught by dancers who have worked closely with Ohad Naharin.

Teachers guide the participants using a series of evocative instructions that build one on top of the other.

Rather than copying a particular movement, each participant in the class actively explores these instructions, discovering how they can interpret the information and perform the task at hand.

Gaga/people classes offer a creative framework for participants to connect to their bodies and imaginations, increase their physical awareness, improve their flexibility and stamina, and experience the pleasure of movement in a welcoming, accepting atmosphere.

Professional dancer and teacher Chisato Ohno graduated from Central School of Ballet and danced with Netherlands Dans Theater 2, Batsheva Dance Company and Karas of Saburo Teshigawara. Working with choreographers such as Jiri Kylian, Johan Inger, Paul Lightfoot, Gideon Obarzanek, Ohad Naharin, Mats Ek and Sharon Eyal. She is a certified Gaga teacher and has been teaching companies and schools in the UK and Internationally since 2005. Chisato is a member of faculty at the London Contemporary Dance School, and joined Rambert School in September 2020.

Rebecca was born in Sydney, Australia. She graduated from Central School of Ballet, receiving a First Class BA (Hons) in Dance and Performance. On completion of her studies in 2008, Rebecca traveled to Israel to dance with Batsheva Ensemble. She also participated in the joint project of Riksteatern and Batsheva Dance Company in Sweden, performing Ohad Naharin’s Kamuyot. Rebecca has been teaching Gaga since 2009. Since 2011 Rebecca has been a photographer, working editorially and commercially in London, UK.

Celine Barreau is a teacher, performer, and choreographer currently working in the UK and in Switzerland. She grew up in Switzerland where she received professional ballet training and then moved to the US where she completed her studies in Neuroscience & Behaviour while still performing in venues along the East Coast. After some time working in a ballet company, she moved back to Europe to study contemporary improvisation methods and fell in love with Gaga. She spent a year in Tel-Aviv training under the direction of Bosmat Nossan and Ohad Naharin and became a certified Gaga teacher in Sept 2021. She can’t wait to share her passion with you!

Jannick trained at the Trinity Laban Conservatoire for Music and Dance. After completing his degree, he travelled the world exploring martial arts and different approaches to movement. During this time, he trained in Capoeira, Brazilian Ju-Jitsu, gymnastics, explored modern movement culture and was also a rock-climbing instructor.

Jannick has extensive experience in immersive theatre, dance theatre and inclusive practice. He has toured the UK and Europe working with various dance companies including: Stopgap Dance Company, Lila Dance and Errant Productions. Jannick was certified as a Gaga teacher in 2021.

Anoushka was born in South East London. She trained on the Foundation Course at Northern School of Contemporary Dance before travelling to Israel to attend the International Dance Journey Programme with Kibbutz Contemporary Dance Company and shortly afterwards to Italy to join Nuova Officina della Danza.  She returned to England in 2017 to become a member of Jasmin Vardimon 2 (JV2). Anoushka has worked with choreographers such as Akram Khan, Jasmin Vardimon, Botis Seva, Karole Armitage and Rami Be’er. She will join IL Dance (Sweden) for their 2022/23 tour before commencing a BA Hons in Comparative Literature at King’s College London.

Anoushka has been a certified Gaga teacher since 2020 and has taught at Universities, companies and studios in the UK and internationally since then.

Siobhan Davies Studios is mostly accessible to wheelchair users, with lifts to all floors. There are two accessible parking spaces available on site which can be booked in advance. Blue Badge parking is also available nearby on West Square and Garden Row (for a full map visit the Southwark Council website). Our main door is not power assisted.