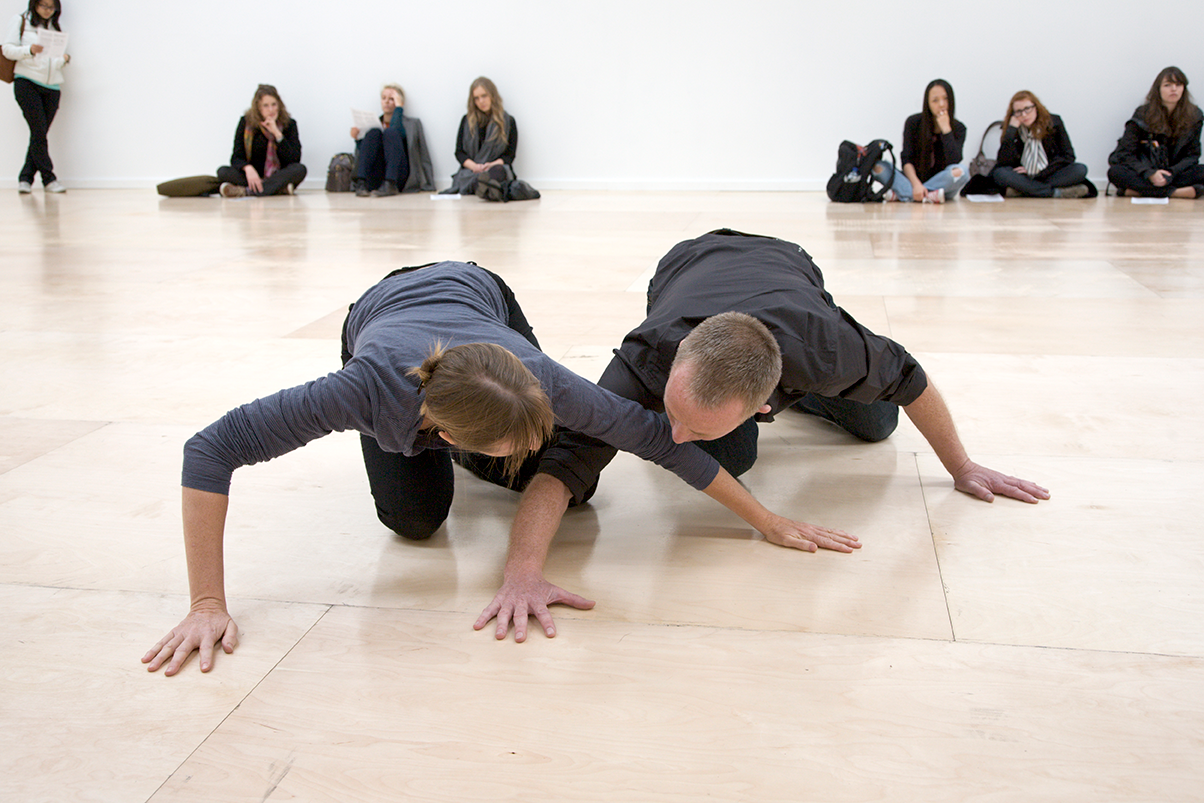 Both a bookend and a continuation, this series of talks picks up from the Conversations series that Siobhan Davies initiated in the early years of the studios in 2008/9. Fuelled by Siobhan’s curiosity (and nosiness), this new series of gatherings moves beyond the studio, and extends an invitation to five practitioners whose research has taken them into other fields. Working side-by-side with those from a multitude of disciplines, these practitioners and their work reflect the continued expansion of choreography over the last 10 years.

Across six evenings, this choreography course features five artists in conversation with an interlocutor of their choice – a guest from each of their respective, and shifting, fields of practice. Siobhan Davies will host the series, and open it up through an introductory conversation.

Continuing Conversations is funded through the Culture Recovery Fund.

Pay-it-forward tickets subsidise bursary tickets across the whole of our programme. If you choose to pay-it-forward, you’re generously supporting other participants to attend, thank you!

Bursary tickets are self-nominated (i.e. you do not need to supply an ID, like when booking a concession ticket)

We want to ensure that this course is accessible to all. As a standard all our online events feature automated transcription and closed captions. On our booking form please state any access requirements you may have. BSL interpretation can be provided on request. In addition, please don’t hesitate to get in touch if you have questions or concerns.

Following the event, transcriptions and audio recordings of each session will also be available for attendees to request.

To get in touch please email contact@siobhandavies.com.

Through the traditions of choreography and cultural studies, Siobhan Davies and Octavia Reeve have discovered a shared fascination in the making of culture through people, practices and institutions. Choreographic thinking and felt intelligence mesh with the urge to understand culture in relation to individual lives, recognising that one life practice (like dance) cannot be understood outside the network of everyday life practices (work, sexual orientation, family life) that we all inhabit. If dance can be fashioned from the movements of everyday life, can paying attention to the everyday let us understand more about the mechanical alchemy, and the social and organisational structures, through which culture is made?

Siobhan Davies is Artistic Director of Siobhan Davies Dance, which she founded in 1988, and a renowned British choreographer who rose to prominence in the 1970s. Davies applies choreography across a wide range of creative disciplines including visual arts and film. Her choreographic works have been presented at some of the most prestigious art institutions in the UK and Europe. She is currently an Associate Professor at the Centre for Dance Research (C-DaRE) at Coventry University.

Octavia Reeve is the Associate Director of the Ada Lovelace Institute. Before this, she worked in the creative and cultural industries as a gallerist and artist studio manager, in publishing as a commissioning editor, and in the technology sector as a product manager. Most recently, she has worked in higher education, leading on strategic content at the Royal College of Art. She has an MA in Digital Media Culture, with a subject specialism in cultural studies of tech workers.

Lucy Suggate and Kélina Gotman will talk about and around Choreography as a transdisciplinary / trance-disciplinary practice. What capacities are revealed when dance-movement-choreography spills over…?

Lucy Suggate is a dance artist and choreographer. She is recognised for her articulate solo performances and group installations informed by the belief in performance as a communal act. Her movement practice is an ongoing inquiry into the perceptual and physical expansion that occurs when engaged in durational moving and thinking.

The discussants look at how practices of screen writing and dance dramaturgy position the body and raise various questions about language, culture and context. A collaboration on the web series Efunsetan (in production) is the starting point for a conversation about the body’s communicative power. ‘Funmi and Funke also reflect on how their shared interest in the body springs from their experience of growing up Yoruba and British.

‘Funmi Adewole is a senior lecturer in Dance at De Montfort University. Her background in media practice, African dance drama and Physical theatre informs her research into dance discourse, Africanist movement principles and Somatic self-inquiry. As a dance dramaturge, she works with choreographers who draw on social and traditional dance forms to create work that interrogates cultural or political discourses. For her dance advocacy, She has received the Dance of African Diaspora Lifetime achievement award.

Funke Oyebanjo is a script consultant, Lecturer and screenwriter. Her credits include The Window produced for Channel Four’s Coming up season and The Land, selected for development at the Berlin film festival’s talent campus. She has worked with BBC writer’s room and Creative England. Funke Oyebanjo is currently a lecturer at University of Greenwich and a PhD candidate at Middlesex University. The focus of her research is the haptic and its role in the screenplay.

Frank Bock and Chrysa Parkinson will discuss their research on developing medium specific and discursive sites for sharing dancers’ artistic knowledge. For the past five years, Frank and Chrysa have been developing interview formats and modes of documentation that move smoothly between verbal, tactile and kinesthetic exchanges. This talk will touch on how they arrived at this project, what the project has brought so far and some speculations on where it might now go.

Chrysa Parkinson’s artistic research is on dancing as an expanded practice. Currently, she is concerned with the roles and materials dancers’ particular forms of authorship generate.

Choreographer Jonathan Burrows and performance theorist Bojana Cvejić share their current research into new perspectives on action and perception, and how these ideas might alter the way choreography is understood. The talk seeks to rebalance the current dominance of somatic thinking and to re-think a future for choreographic practice, as an equally adaptive and felt reflection of human experience, central to the ways in which human beings imagine, communicate and anticipate the world.

Jonathan Burrows is a choreographer whose main focus is an ongoing body of pieces with the composer Matteo Fargion, with whom he continues to perform around the world. The two men are co-produced by PACT Zollverein Essen and Sadler’s Wells Theatre London. His A Choreographer’s Handbook has sold over 15,000 copies since its publication in 2010, and is available from Routledge Publishing. Burrows is currently an Associate Professor at the Centre for Dance Research, Coventry University.

Bojana Cvejić‘s work spans philosophy, theater and performance education. She is author of several books (Choreographing Problems, Palgrave 2015, Public Sphere by Performance, with A. Vujanović, bbooks 2012 and three volumes of A Choreographer’s Score with A.T. De Keersmaeker, Mercatorfonds 2011-13) and collaborated on many theater and dance works as dramaturge/performer/writer since 1996. Cvejić is Professor of Dance Theory at the Oslo National Academy of Arts and teaches at P.A.R.T.S. Brussels.

Researching dance as a bodily practice opens up the possibility of exploring it as a form of embodied knowledge. But knowledge is a persistently slippery thing to get a handle on, especially when the world is changing so quickly. Shifting socio-political dynamics and technological change require us to continually address our understanding of what knowledge is composed of. This will be the starting point of Scott and Lissant’s conversation, as they discuss points of connection between their respective fields of research, in dance and in the anthropology of material culture.

Scott deLahunta is Professor of Dance, Centre for Dance Research, Coventry University. His current research seeks to deepen the awareness and understanding of bodily practices, such as dance, to argue for the corporeality of knowledge and to draw on this understanding to address complex societal issues. As co-Director of Motion Bank, Hochschule Mainz University of Applied Sciences, his research into the documentation of dance practice continues to inform his thinking.

Lissant Bolton is an anthropologist and Keeper of the Department of Africa, Oceania and the Americas at the British Museum. Her research focuses on the Pacific nation of Vanuatu where she has worked collaboratively with the Vanuatu Cultural Centre for many years, developing programmes to document and preserve women’s knowledge and practice. From 2018 onwards, she is the Director of the Endangered Material Knowledge Programme, a project that supports practitioners and scholars to conduct new research on critically threatened material knowledge globally.