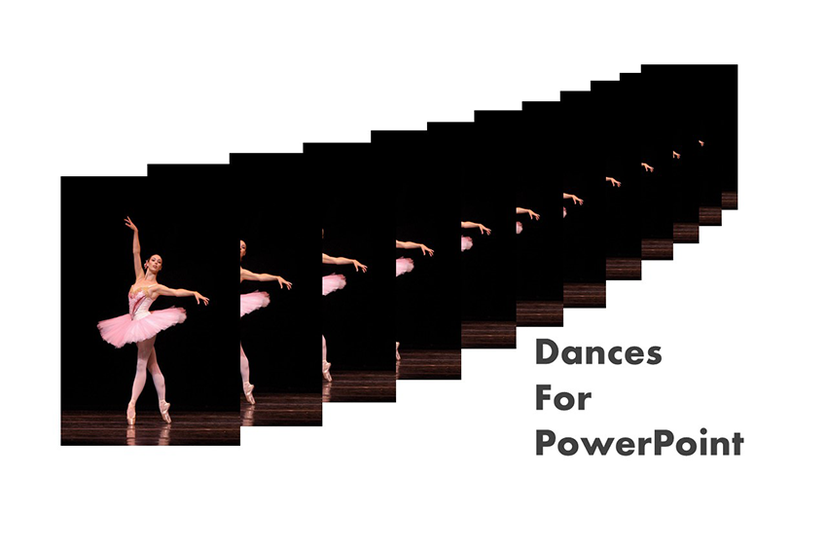 ‘Dances For PowerPoint’ is a developing series by Nikhil Vyas, which uses Microsoft PowerPoint as a site for investigating digital choreographic possibilities and tensions. The series uses the found materials of existing dance documentation, ClipArt graphics, PowerPoint shapes, tools, and animations, sound and the user’s control of the slideshow, locating new choreographies within everyday technologies.

By turns playful and meditative, the work is an ongoing exploration of body, space and time in digital frameworks; an invitation to consider differently how we construct and imagine a dance event.

It is early April, approximately two weeks into the UK-wide lockdown, and I am watching a series of dance solos on my screen.

The solos are a part of Siobhan Davies Dance’s Next Choreography course, and now, as I watch my peers’ and my own recordings over a Zoom call, something is immediately wrong- this isn’t a dance, this is one blocky, poorly rendered freeze frame after another, each discontinuous from the last, like an unsettling inversion of Muybridge’s photographs. Every temporal framework that I usually cling on to watch a dance has been thrown out of the window. This is early lockdown, before Zoom became the defining conduit of reality, and in the moment, I look at these images torrenting past my screen, and I don’t yet see an opportunity. All I feel is a deadened sadness that we cannot be in a studio with each other.

The German composer and sound artist Markus Popp has described his practice as ‘file management’ rather than music-making. This label took a new meaning for me as I began working on this series, as 90% of the labour became a process of screenshots, cropping, resizing, ferrying files and media between platforms, resizing again, recolouring. Popp is best known for his work under the pioneering glitch music project Oval, who created work by damaging CDs, transcribing the resultant skippage and fragmentation onto PCs and building this sonic wreckage into blissful, layered ambient music. I also found myself thinking of Burial, another acclaimed electronic musician, who famously eschewed more sophisticated audio software and instead builds his music on Sound Forge, an archaic waveform based platform where the user has to eyeball and manually alter each layer of sound, a process rife with the potential for fuckups. ‘I’m happy with my drums because they look like a fishbone’, he once said.

Where is the dance in all of this?

After a certain point, I started thinking of my laptop itself as a body, active and aligning itself and seeking cultivation from a cellular level upwards, as Deborah Hay has described her approach to embodiment. I’m still in early days with this work, and pretty much every moment of working with this corporate, maddeningly dysfunctional, intimately familiar piece of software has been a moment of new discovery, but I hope that it moves something in you too.

Material Life (after Trisha Brown) is based on Babette Mangolte’s recording of Trisha Brown’s performance of her Water Motor solo. Filmed at the Cunningham Studio in New York City in 1978, the choreography and its filming are regarded as seminal in the development of Western contemporary dance, and are both repurposed here into a study of time, perspective and fragmentation.

Pure Summer makes use of a video of the artist at Folkestone beach, attempting to recreate a fragment of the score from Trisha Brown’s Water Motor solo. The recording has been transposed to Google Slides and looped; a process that reveals the transformations of imagery possible on digital platforms.

To All The Dancers Of The World, A Round Form Of Fantasy takes the form of a duet – image to image, fingers to music, human to screen – to propose an array of choreographic possibilities within Microsoft PowerPoint. It uses the found materials of slides, ClipArt images, shapes, objects, backgrounds, audio and animations. Music by Sweet Trip.